You can use recycled food containers to grow microgreens but we will recommend using 1020 planting trays instead.

Use sprouting trays for microgreens. They are not that expensive and you can reuse them multiple times. They will make your life easier too. 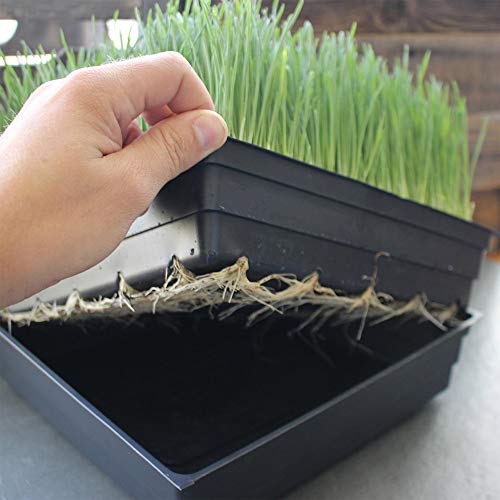 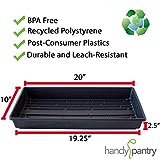 You will be using two trays for your microgreens. One tray is slotted and has holes in the bottom. You will place your growing medium in this one. 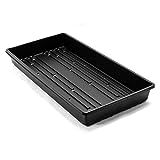 You will place it into a tray with no holes. This tray will catch any runoff from watering the upper tray.

You can use a plant tray without holes to pack down your soil mix. You can place it on top of the seedbed to keep it dark and retain moisture until the seeds start to sprout.

How To Grow Microgreens Indoors In Trays

Here is a video that explains this process. I want to point out that this grower uses peat and perlite for a soil mix. He fills his tray almost to the top with this mix.

There is a third way to grow microgreens in trays using coco grow mats. It’s much cleaner because there is no loose soil. 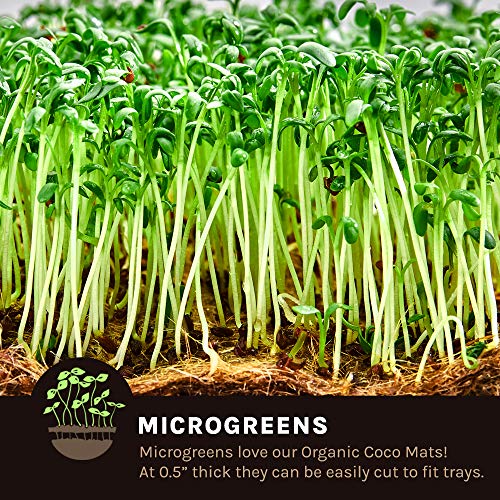 Also, many growers who sell microgreens for-profit use this method. The advantage is you don’t need to cut and bag the microgreens.

Instead, a piece of the mat is cut to fit a container. Then mat and all plants in it are placed in a container and sold that way. The microgreens will stay much fresher this way as opposed to being cut.

While the mats do cost more than using a loose soil mix they provide the consumer with fresher microgreens. For the grower another benefit there is no soil media to dispose of.

How To Grow Microgreens With Coco Grow Mats

The video at the top of the post gives good advice on growing microgreens with soil or coco coir but the technique is different for coco mats.

To use the mats fit them inside the slotted grow tray and place them inside the tray without holes. Then cover the mat with water and let it soak for about an hour or until it is saturated.

Carefully pour off any excess water and your mat is ready for planting. You can sow small seeds like broccoli or radishes directly on top of the mat.

Larger seeds like sunflowers, peas, or beans should be presoaked first. Once they have swollen up they can then be seeded on the mat.

Planting Alfalfa Microgreens On A Tray With A Coco Grow Mat

Here is a video of me planting seeds on a coco grow mat inside a double tray. Alfalfa seeds are commonly used to grow sprouts but I want to see how they will grow as microgreens.

Last time when I seeded my sunflower microgreens I forgot to soak them. I did not want to take them out and soak them.

So I covered them with a thin layer of coco coir and misted it instead. I am sure they will be fine but they may take a few days longer to germinate.

But these alfalfa seeds are much smaller so instead of covering them I just misted them and used another plant tray as a cover.

It is much easier to sow dry seeds. Seeds that are wet can stick together and are harder to sow evenly.

So once these alfalfa microgreens sprout I will come back and update this microgreen project.